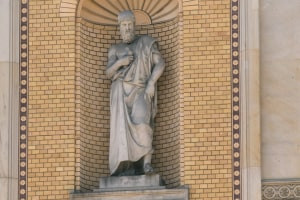 See how prominent political thinkers laid the foundations for the modern world with this free online philosophy course.

Publisher: NPTEL
This free online political philosophy course explains how the Western world developed today’s basic rights. We trace the links between the works of various thinkers like Niccolò Machiavelli, Jean-Jacques Rousseau, Thomas Hobbes and John Locke and their historical contexts. We examine some prominent themes such as freedom and the right to life and property to address timeless dilemmas surrounding public policy, government and sovereignty.
Iniciar Curso Agora

The basic rights many of us enjoy today resulted largely from the thoughts of key influential thinkers. Often considered the ‘founders’ of modern political philosophy, Machiavelli, Hobbes, Locke and Rousseau contributed significantly to Western political and legal culture. They established the widely cherished value of ‘freedom’ as a core value but interpreted it differently. The often ruthless Machiavelli considered it to be the right to have a family, friends and private property. He asserted that any ruler who would like the citizens to support their rule must respect such fundamental rights. Machiavelli also suggested in his seminal text ‘The Prince’ that all means, be they ethical or not, must be used by rulers to achieve their political goals - including violence.

Hobbes argued that there is a need for a sovereign with absolute power to establish the required peace and order for citizens to enjoy freedom. The ‘sovereign’, who is not necessarily a single ruler, must represent all free subjects who unite to constitute it and represent their collective will. Hobbes’ construction of sovereign authority is unquestionably absolute and unbreakable in order to create peace, order and freedom. Locke extended the ‘Social Contract’ tradition started by Hobbes but did not acknowledge any divine right to the sovereign power. He instead advocated for strict limits to government power, along with consent-based legitimacy, which we recognize in the form of the ‘checks and balances’ inherent to today’s liberal democracies. In Locke’s opinion, the state must protect the universal rights enjoyed by all citizens: life, liberty and property.

We then move on to Rousseau and his dedication to liberty, equality and direct democracy. Some people suggest that his philosophy was contrary to Enlightenment because it helped to prompt the French Revolution of 1789. Rousseau considered that the general will should be binding to everybody in the republic and might occasionally demand the use of force. Machiavelli, Hobbes, Locke and Rousseau each addressed the ‘inalienable’ rights we know today and debated the ruler’s role regarding their protection. This course suits anyone interested in understanding the foundations for modern political theory as it traces the words of important thinkers to explain their role in defining the world as we know it.