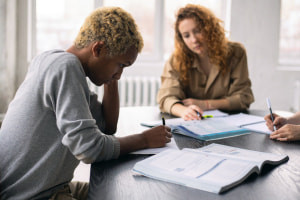 Publisher: ADU
Fundamentals of Linear Equations and Word Problems is a free online course that provides learners with a comprehensive guide on the composition of linear equations and inequalities in two or more variables. You will learn how to solve word problems about consecutive integers and the Pythagorean theorem. This course will identify the methods of solving quadratic equations. Start this course today and improve your knowledge of linear equations.
Démarrer le cours maintenant