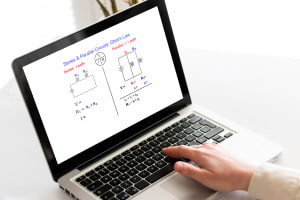 Publisher: Steven Liguori
Take your knowledge of electrical circuits to the next level with this free online course on 'Series Parallel Circuits and Ohm’s Law.' You will learn how to apply the rules and laws to combination circuits with both series and parallel elements, in a straightforward, step-by-step manner. By the end of this electrical engineering course, you will be comfortable with the math, rules, and formulas needed to work with all three types of circuits.
Inicio Curso Ahora

If you are an electronics or automotive student or if you just love working with your hands and have a penchant for DIY, this certificate in electrical engineering is for you. Instead of just presenting formulas, this course explains the thought process, the steps, and the reasoning behind them. Enrolling in this course will allow you to understand the three types of circuits used in basic automotive and electronics and expand your technical knowledge in the field of electrical engineering.