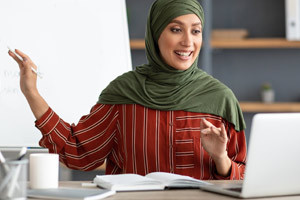 Learn how to write, pronounce and different forms of the letters Saad (ص) and Daad (ض) with this free online course.

Publisher: Muhammad Elshanawy
Many people believe Arabic to be the most beautiful written language in the world. It is valued above all other Arab art forms and is classified similarly to drawing, painting, or fine arts. With just two modules and eight lectures, master the art of writing and enunciating the Arabic letters Saad (ص) and Daad (ض). Discover how to comprehend the subtlety of these letters directly from the founder of the Escolaonline language school.
Démarrer le cours maintenant

One of the languages with a non-Latin alphabet is Arabic. Its scripts are easier to understand for English speakers than others, but it is still a completely new writing system. What makes reading and writing in Arabic especially challenging for beginners is the exclusion of most vowels in words. Arabic is also written from right to left, which takes some practice. This course aims to introduce you to the fourteenth and fifteenth letters of the Arabic alphabet.

The final section illustrates the fifteenth letter in Arabic, the letter Daad (ض). It has the sound of D in English. You will explore the letter Daad with the short and long vowels, as well as Tanween. Arabic letters can have four different forms corresponding to an initial, middle, or final. Start learning how the alphabets Saad (ص) and Daad (ض) links to the letter before or after.

Having completed the course, you will be able to