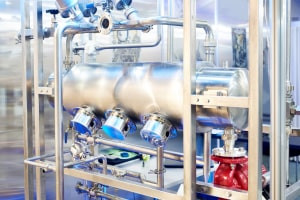 See how heat and mass transfer operations can be scaled up in bioreactors for increased bioprocessing operations.

Publisher: NPTEL
Mass transfer operations play an important role in many industrial processes. This free online course introduces you to the common applications of heat transfer in bioreactor operations, criteria for scale-up, rheology of fluid, and non-ideal behaviours in plug and mixed flow models. It will give you a solid theoretical and analytical background to understanding transfer operations in bioreactors.
Inizio Corso Ora

Mass transfer operations play an important role in many industrial processes. A group of operations for separating the components of mixtures is based on the transfer of material from one homogeneous phase to another. This free online course will introduce you to fundamental concepts, principles, and applications of scale and transfer operations. Learn the common applications of heat transfer in bioreactor operation such as in situ batch sterilization of liquid medium and temperature control during fermenter operation. The fundamental principles of scale-up, such as geometrical and dynamic similarity, will be comprehensively discussed. The objective of a scale-up in a reactor design is to determine the criteria on which to base the transfer of the laboratory scale into a full-scale commercial unit. This course will teach you the different criteria used for scale-up, and potential problems. You will consider the dimensionless parameters and mathematical modelling in scale-up. Knowing how to measure the oxygen uptake rate is useful in assessing growth, viability, and metabolic activity. Uncover the mass transfer coefficient and determine cell concentration that can be supported by the fermenter's oxygen-transfer system. Factors affecting cellular oxygen demand and the steps for oxygen transport from gas bubble to cell are presented. Several selected problems are solved to illustrate the concepts clearly.

Find out the factors influencing the dimensionless mixing system and the equation providing the relationship between mixing time. The factors affecting oxygen supply rate and the variables that can be manipulated to change the oxygen supply rate will be elaborated. You will see the key variables of the biochemical process influenced by the size and the three distinct stages involved in bioprocess development. Learn how to determine power consumption by an agitator, the impeller speed, and how using a different fluid can make scale-up possible. Uncover the important considerations in dimensionless mixing factor, the steps to be followed in scale-up, and the functions of an agitator. Familiarize yourself with the classification of fluids based on their behaviours as Newtonian or non-Newtonian fluid and become familiar with Newton's law of viscosity, the power-law model, and time-dependent behaviour. The equation for oxygen transfer rates, such as the static and dynamic method and the correlation for mass transfer coefficient, will be illustrated. You will learn the different heat combustion of biomass, and find out how to design a batch heat exchanger and the model equation for the batch system. The general equation for temperature as a function of time during the heating and cooling periods of batch sterilization will be explained.

Finally, you will study the non-ideal behaviours in plug flow and mixed flow reactors. Find out the causes of deviations in flow patterns and other interrelated factors that make up the contacting or flow patterns such as the residence time distribution, state of aggregation of the flowing material, the earliness, and lateness of mixing of material in the vessel. The pulse and step input experiment will be used to find the relationship between the F and E curve. Learn how to calculate the mean residence time of fluid, tabulate and plot the exit age distribution of the E curve. Determine the average concentration using the second-order equation, the mean residence time of the liquid in the vessel, and the E curve for the liquid. By completing this course, students will gain theoretical and analytical background to understanding scale-up, as well as heat and mass transfer operations in bioreactors, understanding how to apply them in the real world. Start learning this bioprocessing course today and become well versed in the field of biotechnology.

All Alison courses are free to study. To successfully complete a course you must score 80% or higher in each course assessments. Upon successful completion of a course, you can choose to make your achievement formal by purchasing an official Alison Diploma or Certificate.