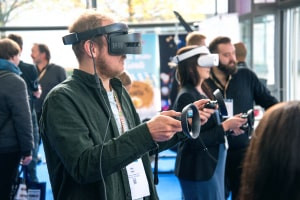 Learn about the purpose of a VR tracking system and the concept of visual rendering in this free online course.

Publisher: NPTEL
This course examines positional tracking VR technology and the benefits of the VR experience. We will show you the concept of visual rendering, which specifies what the visual display should reveal through an interface to the virtual world generator (VWG). We examine orientation tracking and integrating sensor readings to estimate the orientation and rendering for captured, rather than synthetic, virtual worlds.
Start Course Now

Keeping track of motion in the physical world is a crucial part of any VR system. Unfortunately, tracking was one of the most significant obstacles to bringing VR headsets into consumer electronics and remains a major challenge due to our desire to expand and improve VR experiences. However, this course covers the easy case of tracking rotations around a single axis to prepare for 3D orientation, extending the framework for tracking the 3-Degree of freedom (DOF) orientation of a 3D rigid body. Highly accurate tracking methods have primarily been enabled by commodity hardware components, such as inertial measurement units (IMUs) and cameras, that have plummeted in size and cost due to the smartphone industry. This course will teach you about the tracking of position and orientation together, which in most systems requires line-of-sight visibility between a fixed part of the physical world and the object being tracked. We discuss the idea of tracking multiple bodies that are attached together by joints.

This course will show you the principle of using sensors to build a representation of the physical world to be brought into the virtual world. You will learn about the most powerful paradigm for 6-DOF tracking. You will be taught primary visibility algorithms based on ray casting that provides real-time performance and a feature set well suited for rendering virtual reality. Also, this course goes on to show the main difference between the two major families of rendering methods and how visibility is handled. With the widespread use of AR/VR head-mounted displays, there is an increasing demand for pinhole cameras to test their image quality. However, it has been challenging to design a pinhole camera with a wide field of view (FOV), high image performance and low distortion while maintaining compact and lightweight. Furthermore, we will show you the pinhole camera model and how tracking is done using a camera.

Finally, we engage you in the subject of visual rendering and what the visual display should show through an interface to the virtual world generator (VWG). This course investigates how to prepare models to be rendered and then uses integrated rendering programs to create graphic images. We cover the basic concepts of ray tracing and rasterization; these are considered the core of computer graphics, but VR-specific issues also arise. They mainly address the case of rendering for virtual worlds that are formed synthetically. Also, this course goes on to explain latency reduction, which is critical to VR, so that virtual objects appear in the right place at the right time and addresses VR-specific problems that arise from imperfections in the optical system. Learners who want to gain an in-depth understanding of tracking and its various benefits to VR experience will find this course valuable. Also, those who want to understand the process of generating a photorealistic or non-photorealistic image from a 2D or 3D model. This course requires background knowledge in math, physics and computer science. Enrol today to understand all there needs to know on VR tracking and rendering.