The Anatomy of The Cerebellum 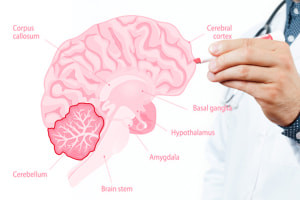 Study the cerebellum, a vital brain component that helps you maintain balance, in this free online neuroanatomy course.

Publisher: Learning Anatomy
Do you wonder how the brain sends signals to various parts of your body within fractions of a second? Whether you are playing soccer, cycling or just simply walking, the workings of the cerebellum play a crucial part in the entire body's function. This online course on the anatomy of the cerebellum will teach you the various structures, segments and regions of this crucial brain component. So do not waste any more time and enrol now!
Start Course Now

Are you curious about the inner workings of the central nervous system? Or are you wondering how our brain sends signals to our muscles while moving or lifting heavy items? This course on the anatomy of the cerebellum will serve as your guide for understanding how the cerebellum operates. We start by analysing the various sections and divisions of the cerebellum. We discuss each division in detail as they have separate roles in the operation of the human body. For example, the cerebellum helps the human body develop motor skills and maintain balance and posture. We explore the intricate details that go into the function of neurons within our brain and investigate the external features of the cerebellum.

The human brain is a highly complex structure with countless neurons and cells. Understanding the neurons and fibres that run through the brain helps knowing how it operates in different situations. We analyse the different layers that make up the cerebellar cortex as it has a crucial function in transmitting brain signals. We discuss the role each layer plays in performing various actions. We present diagrams to help you understand each part of the cerebellum and then explore the intracerebellar nuclear mechanism, which is part of the functional unit of the cerebellar cortex.

Ever wonder how the human body creates hand-eye coordination while developing motor skills? Each section of the brain has its part in developing certain skills as the human body grows and evolves. Different kinds of lobes within the cerebellar structure play a separate role in developing different skills. We investigate the functional areas of the cerebellar cortex using diagrams to specify each activity that they perform. We explain the key fibres involved in developing voluntary motor skills. Despite the importance of the brain and its components in the proper function of the human body, it is still the most understudied area of human anatomy. The intricate workings of this organ are continuously being researched by doctors and scientists worldwide. Don't waste any more time if you are curious about how the brain operates and is structured. Enrol today and take your personal or professional path forward.

Structure and Function of the Cerebellum

Free, Online The Anatomy of The Cerebellum Course