Learn the skills required for working as a journalist and the key practices and procedures in journalism and reportage.

Media and Journalism
Free Course
Learn the skills required for working as a journalist and the key practices and procedures in journalism and reportage.
Start Course Now 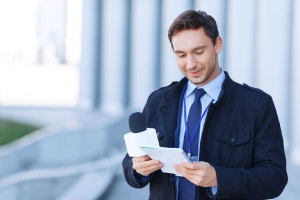 Learn about the principles, practices and methods involved in all aspects of the journalistic process by studying the course Diploma in Journalism. The course begins by introducing you to the key elements of the journalistic process such as identifying what is and what is not newsworthy, how to identify stories which are new, unusual or significant, and how to distinguish between a big news story and a small one. You will learn about organizing and writing the feature story itself: you will learn how to define a feature story, what the basic approaches to writing the feature story are and what different types of feature stories there are. The approaches involved in getting the required information for a feature story and putting it into an easily understood form is also explained. You will also learn about the different roles and responsibilities in a newsroom and how to use story weighting to assess a story's value and newsworthiness. You will learn how journalists must live up to the highest standards of integrity such as truth, fairness and sincerity, and you will learn why journalists must avoid even the appearance of a conflict of interest.

The course continues by reviewing the online risks and threats affecting the modern journalist, and how journalists need to be more aware of digital safety. Next the main factors in relation to reporting methods are explained as well as how journalists need to become as efficient as possible, embrace technology and use the power of the online community to help with their reporting. Different tools such as crowdsourcing, distributed and open source reporting and the use of social media in journalism are reviewed. You will also learn about the ever-growing set of tools, techniques, and approaches to storytelling known as data journalism, such as data visualization and news applications and the laws, statutes, and codes that spell out in detail the conduct required of news organizations.

Finally, you will learn about the different newspaper and magazine types, their history and how advertising and mass circulation have had an effect on the spread of national and international media. You will also learn about editorial manipulation and its impact on society, such as the relationship between the media and politics as well as the use of political information.

Module 9: Journalism and the Free Press